At about 1 hour and 44 minutes into the meeting, SH Councilman Mike Taylor addressed
the Commission. Following this section is a print out from Michael Taylor’s blog which appears to have been taken down. Mr. Taylor writes in favor of the mosque as he does in the clip above.

Take a moment to read the PDF link which includes Mr. Taylor’s own words. He appears to be completely ignorant himself of the dangers posed by “radical” Islamists and dismisses this as any kind of valid concern while accusing the opposition of being bigoted, hateful and irrational. This seems to be a recurring habit of Mr. Taylor, berating his own constituents and calling them names. I would think a lawyer would be a bit more diplomatic. It would seem that his willingness to chastise his constituents is equal to that of his ignorance of the topic at hand.

This is enlightening, is it not?

I can only speculate as to what the motivation or agenda may be behind these types of comments, when people are getting decapitated in broad daylight around the world including on US soil. Perhaps he needs a primer on the issue. Mr. Taylor if you are reading this, you might hop on over to BareNakedIslam and Walid Shoebat’s blog to start your education. For a tidy list of documented attacks, take a look at this chilling wikipedia list. As a father, you sir, SHOULD be particularly interested in the Beslan attack but in the interest of fair play, be warned this is very disturbing material that is not for the weak of heart.

Terrorists don’t just target big buildings, airports, refineries or ship channels. They also target something very near and dear to our hearts and souls: our children.

Most of us understand that terrorists’ primary objective is to instill fear in each and every one of us. Fear makes everything else possible. What better way to achieve that goal than to attack our schools and murder our children?

A plot that shocking would, without question, strike fear into all of our hearts. No one, from the farmer in Wisconsin to the banker in Manhattan would feel safe anymore. – By Fmr. FBI Special Agent Don Clark

In case you did not already know, the “Boston Bombers” were also “refugees” from Chechnya. Chechnya is the same hotbed of Islam that the cowardly murderers of 186 children at School No. 1  came from. THINK ABOUT THAT AND LET IT SINK IN.

Here is a video tribute to those perished souls:

For the rest of the readers: YOU DECIDE. 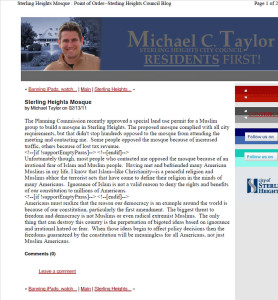 Fast forward to today’s mosque controversy centered around a location near 15 Mile Road in Sterling Heights. Many were pleased and many were not pleased that the mosque proposal was denied – right before the impending election – presumably due to push back from the community. This effectively TABLED, but did not kill, the proposal, as the petitioners have a year to continue pursuit of their goals. Will electing the incumbents reverse this decision? You decide!

Here is a transcription of the clip above:

“I must say that there are an exorbitant amount of people here to talk about a traffic issue. I would say that most Planning Commission meetings address similar traffic concerns and if your planning commission meetings are anything like our council meetings, there’s about a fraction, maybe 1% of the number of people here. What I fear is that this is a pretext for something else. Traffic congestion is a way of life. If you drive on 69…”

“I attend a church. There’s traffic congestion Sunday mornings. There’s traffic congestion anywhere you go if you go to a heavily populated church. You guys have an important decision to make. And for you to make the right decision, approve this special land use. Let this community of people go to the mosque and worship like every other religion in Sterling Heights and every other people in Sterling Heights has a right to do.”
“There may be more congestion, but we’ve heard from Mr. Mindy tonight who has said it’s not a problem. It’s well within the acceptable range here. I implore you to make the right decision here. Grant this special land use. Thank you.”

As Mr. Taylor spoke , at times, he had a big smile on his face. Watch the short clip and judge for yourself whether Mr. Taylor appears to be wholly enthusiastic in his support for the mosque and whether this is i line with your beliefs.

Come back later as we are working on the whole video that while lengthy, does include some other interesting discussion.