Skip to content
Home/Sterling Heights Bullies in Action!
Previous Next

This is the kind of politician you get when only 24% Vote – an “end around” on religious beliefs.

Should our elected officials be harassing constituents with whom they disagree?

On June 17, 2014, local government officials in the City of Sterling Heights unanimously passed an ordinance with little or no public scrutiny at all. Though the room was packed with interested parties, attendees report that the council failed to consider any opposing views and their 7-0 vote confirmed this. Through their actions it is clear their own personal, political agenda is what is important, not the will of the people they are elected to represent.

The ordinance passed has been presented as a nondiscrimination ordinance that in reality creates discrimination against religious individuals and other entities through its implementation. Thus, instead of representing the people they have actively worked to create strife and divide the community using the pretext of a nonexistent problem. Instead of addressing a problem, they have created one.

It is important to remember that elected officials are not voted in to give special rights to some in the community. Furthermore, it is interesting that they are attempting to do so despite there being no reports of a problem existing in the first place. In fact, officials were asked directly if there had been any reports of LGBT discrimination in Sterling Heights and the answer was no. ZERO. NONE.

When City Council members act in this fashion they clearly have no respect for their position, the electorate or their own oath of office. They have chosen to rule, not represent and act as participants in a form of government previously alien to the United States, a top-down, low level tyranny.

While some may be uncomfortable or disagree with the use of the word tyranny, please consider watching the video below. In it you will find citizens – residents of the City of Sterling Heights – in a petition drive to get the signatures required for a referendum to put the issue to the voters of the community. As you will see and bystanders will confirm, they were harassed and interfered with by members of their own city council as well as LGBT activists. These individuals show their true intentions with their interesting shirt design brazenly proclaiming LGBT’s to be “>”, or “greater than”, those of other.

UPDATE [1-6-15]: Ms. Julie Bondy, pictured below, has been appointed to the Housing Commission by the City Council. The appointment is pending qualification review and the oath of office – as if that means anything to these people. The appointment was passed by a vote of the city council members and passed 6-0 on 1-6-2015.

Watch as bigot baiters Councilman Doug Skrzyniarz, (now) Mayor Pro-Tem Michael Taylor, aspiring candidate for City Council Nate Shannon, Julie Bondy and others march in front of petitioners and attempt to intimidate would-be petition signers. They are also clearly seen attempting to intimidate and bully others that do not support their view. 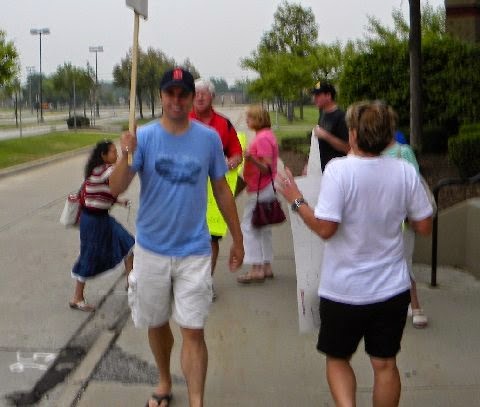 Is this not a violation of the City of Sterling Height’s written Code of Conduct and City Code of Ethics for council members?

With this article it is not the author’s intention to argue against the right to protest. It is this author’s position that elected officials should not be bullying petitioners and other constituents for any reason and certainly not with in-your-face goose stepping no matter WHAT the issue is.

Mr. Skrzyniarz, the freshman on Council is the most visible participant In this bullying episode with what many would deem quite obnoxious behavior.
Is this what we call the freedom to petition our government?

Do we want these types of divisive individuals on our City Council or County Board?

Do we want government determining our moral compass?

In related news, County Commissioner Fred Miller has stated (Sterling Heights Sentry Oct. 1, 2014) “I’m proud of all the commissioners who put politics aside and did the right thing by voting in favor of this” when referring to the recent adoption of LGBT friendly County policy. Put politics aside? This is typical from members of the left who utilize the “isolate and ridicule” tactic to avoid discussion and completely politicize their issue of the day.

Particularly illuminating is Macomb County Board of Commissioners chairman David Flynn who says of his yes vote on said County policy, “I was elected by the people to do what is right, and that’s what I did today.”  You can read more at the Sentry.

With their actions they show a blatant disregard for representative government and a startling lack of wisdom, character and manners.

You can act, your vote matters.

The petition drive was eventually successful, gathering almost 8,000 signatures in just a few weeks due to the overwhelming public support to simply put the issue on the ballot or repeal it.

Also, several former council members are opposed to this and are participating in the opposition movement as well as making plans to run for Council at the next opportunity. Please consider supporting them.

Finally, a word on the term “discrimination”. Please remember that discrimination is defined (by Webster’s) primarily as “to mark or perceive the distinguishing or peculiar features of” and “to use good judgment”. Every person on the planet discriminates every moment of the day. Forcing individuals to abandon their own innate ability to choose is simply wrong.

In conclusion I pose the question – Do we need politicians like this? I believe the answer is NO, we do not.

Watch the You Tube Video

Please forward this article every week as you see fit, especially to local and county wide individuals and organizations. If you send this by Email, please remove the previous sender’s information.