This is what you get when only 24% of the people vote!

Tip: The primaries are coming in August!

In a stunning display of brazen, in-your-face cronyism, the Sterling Heights City Council appointed LGBT activist and local bully Nate Shannon to the same. This move filled a vacancy that had been created after Michael Taylor was appointed Mayor by the council. Mr. Taylor has now taken on the Mayoral responsibility due to the untimely passing of Mayor Notte.

Previous to the January 6th meeting, some 29 Sterling Heights residents attempted to make their case for the open council seat with many having credentials vastly superior to Mr. Shannon and perhaps even any member of the existing council. It is a shame (sham?) that some other set of criterion was apparently used in this case.

Our other LGBT *star*, Julie Bondy, was also appointed to a position with the City of Sterling Heights. Ms. Bondy has been appointed to the Housing Commission.  It is unclear what qualifications she has for this position. Previously Ms. Bondy was appointed to the city’s Ethnic Committee but ended up resigning soon after the appointment. 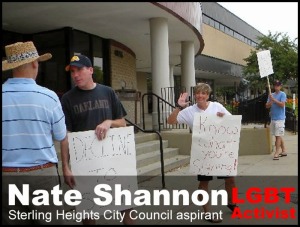 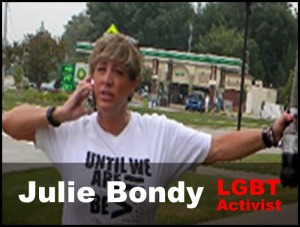